In the previous lesson 1 pages simple game we thoroughly acquainted with all the issues that may occur when you create the very minimum necessary functionality that is present in any game: the use of sprites, gaming facilities, creating a game scene (levels, rooms), motion control, coordinate system screen and vector, loading and moving (scrolling) for the scene (levels, rooms), dressing appearance, collision detection (collision), a simple AI (artificial intelligence) Managing NPC (game objects that are controlled by the program and not the player), the calculation of the game score, and finally play in game sounds and music.

page 8 - Foreground - Closing of the scene from the cavities by means of a black texture with a slot, restricts the movement of the scene


List as you can see, quite extensive. But all this is already painted and sold. You only need to carefully examine, investigate the code to make the necessary experiments and Hurray! You can learn how to create their own games. Neither the incomparable feeling when the first (or any another game in a row) comes as the fruit of the creation of your hands and mind !

To have the opportunity to create their own game on the basis of an example simple_game with unlimited possibilities of further expansion! - Subscribe to fle game engine -

Subscribing to fle game engine You get an example of the game simple game with source code, and you can not just read everything that will be described below, but do yourself in your own application with the possibility of unlimited expansion. Also, you get

for the latest version Scene Editor fge 1.0.2 (on current moment) with support for more features: grid settings, scrolling, and more. In the free version, these features are not supported. more details about the distibutive of a paid subscription.

All of this was just the basics! We turn now to a more in-depth study of the problem of creating games. Especially their aesthetic design, exploring the dynamic component, game mechanics, and other interesting and useful questions.

Today, I decided to mention in this tutorial are 2 problems: the creation of a new gaming scene for simple_game and the creation of its extended version - simple game extended, which will gradually add some new features: improved graphics, some new elements and mechanics , referred to earlier, or something new that came to mind.

Of course, you can also actively participate in this process: first by implementing some of his ideas in the game simple game, and of course adding to it something new. You can share here your suggestions or results - leaving a comment or via any of the contacts available on the site.

- with the growth of the gaming score dialed speed ball movement is gradually increasing, but at times reduced to give the player a short break;

- forming a game level blocks to change the image (but work on their appearance will still continue);

- added another option for the skin of the game window - another texture to fill it, the slot forming an unusual appearance;

- and of course added a new music track mp3 grass, all in the game is available 4 tracks, they play on-line, you can change the playback order, add new tracks, pause (but these opportunities there are in the basic simple game version); 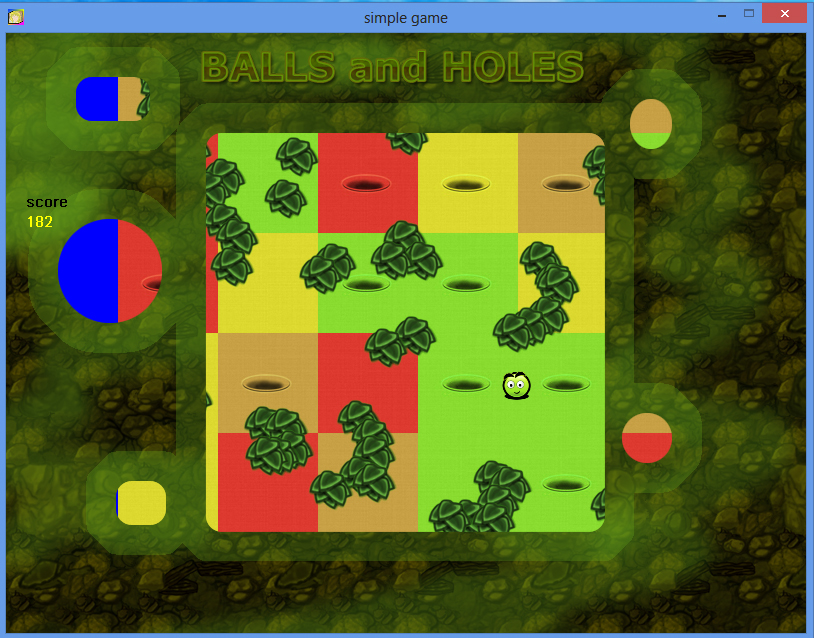 Continuing the theme of jumping balls and holes in the game Balls and Holes.

- implemented the correct display in full-screen modes for standard (for aspect ratio 4:3 or 1,333(3) ) with different resolutions;